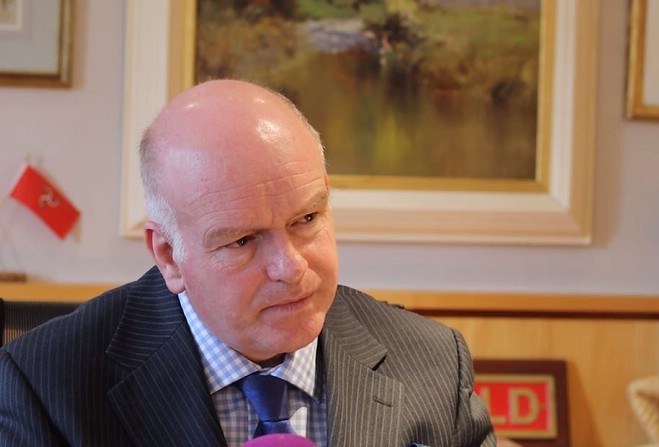 The chief minister has admitted ‘mistakes were made’ regarding the third outbreak of Covid-19 on the Island in February, in relation to the Steam Packet.

Howard Quayle made a statement after the results of a report he commissioned, from Treasury’s internal audit team, were published.

Mr Quayle says “we didn’t get everything right, and the report tells us that. We weren’t always as joined-up as we should have been and perhaps inevitably, mistakes were made.”

The Council of Ministers has accepted the report’s findings and recommendations in full – eight were made in total, six under the responsibility of the Cabinet Office, two the Steam Packet.

In a 94-page document, the findings from auditor Stephen Hind, outlines the timeline since the start of the pandemic and the communication between government, Public Health and the Steam Packet Company.

Government advice to the Steam Packet

In relation to advice from gov’t to the SPC, findings show there were ‘instances where IOMSPCo have not been treated as a high priority by government’.

Looking at ‘statutory processes’ the report notes no Direction Notices were issued to SPC resident crew until 25 February, 2021 – “e.g. requirements for registration/health declarations and landing cards.”

Mr Hind explained he wasn’t “able to undertake an audit/reconciliation in relation to whether all IOMSPCo Manx Resident crew have been registered as residents (as is required by the Regulations), however it is noted that it is stated that the first registration did not occur until 25th February ’21.

“The format used for the delegation of the Director of Public Health’s authority is in ‘blanket’ form and would benefit form further review”.

It adds that “at no point during this process has the views or advice of the IoM Ship Registry, the responsible regulator for IOMSPCo vessels whilst at sea, been sought by either TNS (Travel Notification Service) or the IOMSPCo”.

The document explains that from the start of the pandemic, the Steam Packet sought Public Health advice, and were informed of:

It says the “differences between self isolation and social distancing were also clarified by Public Health to the IOMSPCo”.

“They were progressive in introducing new measures to mitigate risks and to protect business continuity, some but not all of which were periodically rolled into their suite of Covid response plans, such measures included:

In the ‘negative indicators’ section of risk governance, it explains that “in April 2020 when a positive crew case had been confirmed and Contact Tracing had assessed matters, the IOMSPCo’s interpretation of the self-isolation requirements for non-Manx resident crew was called into question between Contact Tracing and Public Health.

Non Manx resident crew had “been popping into the shops”

“However the matter was not resolved internally within government, and no further direction was given to the Steam Packet in this regard.

“At that time the IOMSPCo had confirmed to Contact Tracing that non Manx resident crew had been ‘popping into the shops’ on the way to their accommodation.”

The report outlines that in the early stages of the February outbreak, “the Contact Tracing team were very efficient in making contact following notification of a positive case.”

However it also notes that “there appears to have been a critical delay of 7 days between the identification of the IOMSPCo UK Crew positive case and the Contact Tracing teams contact with the subsequent four IOMSPCo Manx Resident crew cases and related Self Isolation instructions.

“The test, trace and isolate strategy as adopted did not successfully contain the outbreak resulting in full community lockdown… there was also no full crew testing regime in place.”

The chief minister has called on the Isle of Man Ship Registry to consider whether a further investigation is required and whether any other agencies need to be involved.

Douglas beach searched after person thought to be missing